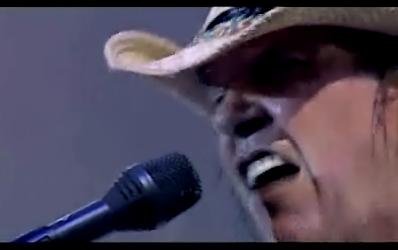 He Sleeps With Angels

In Kurt Cobain's suicide note he quoted Neil Young's song "My My, Hey Hey" lyrics "It's Better to burn out, than to fade away."

Cobain's use of the lyrics had a profound impact on Young, who recorded portions of the 1994 'Sleeps With Angels' (listen to a sample clip here) album in Cobain's memory.

Apparently, Neil Young had been trying to reach Cobain by telephone in the days before his suicide to no avail.

On "Mirror Ball", though, the natural incompatibility of these forces has been raised into shocking relief by one disciple choosing an unfeasibly extreme interpretation of Young's message when Kurt Cobain quoted, "It's Better to burn out, than to fade away." In his suicide note, citing Young's lyric as artistic justification for ending his inconsolable anguish, Young was shaken to the bone. Always an advocate of allowing the listener his or her own individual path through a record, he was so devastated by Cobain's personal reaction to a song that was basically written as a celebration of Punk that he was impelled to record the 'Sleeps With Angels' album in lament."


The NME article continues and observes:

"Perversely, it is testament to Young's emotive power that Cobain should choose his words as an epitaph, but it is something Young still visibly shudders from. Once a song is out there on the radio, he reasons, it's not anyone's responsibility anymore.

As for Cobain, he mutters: 'I don't wanna talk about that. I just don't know what to say. Obviously his interpretation should not be taken to mean there's only two ways to go and one of them is death.'

He laughs a cold, dry laugh.

It's rumoured that Young was trying to contact Cobain at the time of his suicide, that he somehow foresaw the tragedy coming.

'I don't wanna talk about it," says Young. 'I really don't because I respect the fact that he's a guy who did what he did and, y'know, he did what he had to do and I don't wanna get any ...' He falters and recomposes himself behind alarming blue shades.

'I prefer to not be involved at all. I certainly don't wanna take advantage of talking about something like that for the interest of somebody else I've never met and selling myself in paper in the process. I'd rather you just left it out. It's just distasteful to me.' "

During Neil Young's induction speech into the Rock & Roll Hall of Fame on January 13, 1995, Young choked up and concluded by thanking Cobain for "all of the inspiration".

It has been debated as to whether Kurt Cobain or Neil Young is the Godfather of Grunge? Cobain's demise has only added to Nirvana's musical legacy and influence. Yet Young has strenuously avoided any such labeling, preferring to be called "Don Grungio" instead.

From a Neil Young interview in MOJO Magazine with Nick Kent:

Q. Sleeps With Angels seems deeply haunted by the spectre of Kurt Cobain and his sad end...

A. Sleeps With Angels has a lot of overtones to it, from different situations that were described in it. A lot of sad scenes (pause), I've never really spoken about why I made that album. I don't want to start now.

Q. Has it anything to do with the similarity of Kurt Cobain's death to Crazy Horse Danny Whitten's death in 1972? They both looked so much alike...

A. I just don't want to talk about that. That's my decision. I've made a choice not to talk about it and I'm sticking to it. [Also see, Danny Whitten and Kurt Cobain: Tragic Similarities]

Q. Let's not discuss Cobain's death then. But what about his life? Did his music inspire you?

A. He really, really inspired me. He was so great. Wonderful. One of the best, but more than that. Kurt was one of the absolute best of all time for me.

Q. "Scenery" on Mirror Ball (recorded with Pearl Jam) seems equally haunted by Cobain's doomed image. It's like there's OJ Simpson on one side and Kurt Cobain on the other: two very different victims of celebrity madness?

A. Well, the problems with celebrity and rock'n'roll start with the fact that nowadays it gets way too big too fast. Back in the '50s and '60s, rock'n'roll was 'big' but it was only 'big' to people who cared about it. Now it's big to people who don't care about it. So they can't begin to understand it. They just make ill-informed judgements on performers without first comprehending why or what it was that made the person famous in the first place. In the '60s there was a bond between the artists and the audience. It's harder to see now because so much these days is simply down to image projection. But today's pessimistic bands have a vision and an attitude that's unified their generation just like the 'peace and love' groups helped unify the '60s generation.

Both Nirvana and Neil Young recorded their MTV Unplugged performances in 1993. During Young's recording session for Unplugged, he performed his anti-drug/anti-heroin song "The Needle and The Damage Done".

"That's an immature comment by a guy who's young, and trying to find his place, and a little confused. Because Pearl Jam is good. Why put 'em down? Just because they live in the same city and they're both big bands? It's pointless.'

But Young completely identifies with Cobain's impulses toward intransigence and loner individuality.

"I really could hear his music. There's not that many absolutely real performers. In that sense, he was a gem. He was bothered by the fact that he would end up following schedules, have to go on when he didn't feel like it, and be faking, and that would be very hard for him because of his commitment. "

From a review published in Broken Arrow magazine article titled "Sleeps With Angels: The Sequel to Tonight's The Night?":

There are other similarities between the late Danny Whitten and Kurt Cobain tragedies besides their grizzled blond looks, fondness for heroin, tortured singer/songwriter/guitarist artist and death before age 30. More on Danny Whitten in the Broken Arrow article by Scott Sandie, Issue #87."

At one point, Young said he would never perform 'Hey Hey My My (Out Of The Blue)' again in concert. In 1994, at his annual Bridge School Benefit Concert, Young performed the song again - immediately after singing 'Sleeps With Angels' in the setlist.

Much as John Lennon's murder put an end to the 1960's love and peace spirit (albeit some twenty years later) or the death of Lynyrd Skynyrd's Ronnie Van Zant ended a chapter in Southern Rock history, Kurt Cobain's death marked the end of the grunge era.

In the final analysis, an interview with Neil Young in The Guardian by Burhan Wazir in May 2002, sums up the impact of Cobain's and Nirvana's influence on the grunge music of the 1990's:

"I eventually ask him if he finds his thoughts turning to Kurt Cobain. They never met, but credited each other's music in the media. He tells me he tried to reach the Nirvana singer in the week he died.

'I read something and someone told me a few things that made me think he was in trouble that week,' sighs Young. For the first time, he is not looking directly at me, but staring off across the table. He describes how he tried, over three or four days in the first week of April in 1994, to reach Cobain. 'I even had my office look for him.' By that Friday evening, Cobain had taken a life-threatening dose of heroin and shot himself.

In a suicide note Cobain left, later broadcast by his widow, Courtney Love, Young found himself inextricably linked with the singer's death. Cobain had ended his letter with an old Young lyric: 'It's better to burn out than to fade away.' Love commented that the line was a "lie" in Heavier than Heaven: A Biography of Kurt Cobain.

Destroyed by grief, Young hit the studio and recorded his bleakest work, Sleeps With Angels. It was released with a moratorium on interviews. 'I've never really spoken about why I made that album,' Young told an interviewer in 1995. 'I don't want to start now.'

But today, he opens up. 'I like to think that I possibly could have done something,' he says, concentrating on finding the right words. 'I was just trying to reach him. Trying to connect up with him.'

He pauses and thinks again. 'It's just too bad I didn't get a shot. I had an impulse to connect. Only when he used my song in that suicide note was the connection made. Then, I felt it was really unfortunate that I didn't get through to him. I might've been able to make things a little lighter for him, that's all. Just lighten it up a little bit.'"

Young was quoted in the book Shakey - A Neil Young Biography on Cobain's death:

"What that suicide has done is return me to my roots. Makes me go back and investigate where I started. Where I came from.

Why am I here and why is he not here? Does my music suffer because I survived?"

Neil Young and Crazy Horse : "Sleeps With Angels" live in Mountain View in 1994 at the Bridge School Benefit.
ADVERTISEMENT

For more about Kurt Cobain and Nirvana, see the reviews of Neil Young's 'Sleeps With Angels'. Also see Kurt Cobain on Wikipedia

So who really is the Godfather of Grunge? Vote in poll and more about Neil Young's influence on grunge and Eddie Vedder. Heavier than Heaven: A Biography of Kurt Cobain